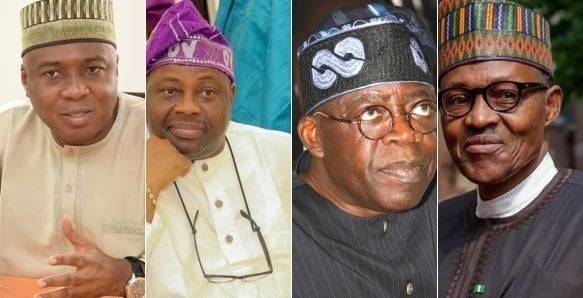 Ovation Magazine Publisher, Dele Momodu has revealed what he and Senate President Bukola Saraki talked about, concerning Buhari and Tinubu.

Both men had the discussion during the Eid El Kabir festival, in Ilorin, the Kwara State capital. Momodu made the revelation on Saturday in an article entitled, “How Saraki plans to defeat Buhari in 2019”.

See what Momodu wrote below;

“Saraki’s roadmap to victory is simple. Buhari is going to play the usual ethnic card that only a candidate from North West can win a Presidential election in Nigeria. Saraki feels otherwise. He believes that the pro-restructuring crusaders now have an opportunity to make the Presidency available to other Nigerians. He concedes that it may be difficult for any candidate from North West and North East to compete or beat Buhari hands down, despite the fact that PDP parades more experienced politicians and competent aspirants.

“What is then needed is to keep North Central on lockdown with a popular candidate from that zone. With the support of PDP stalwarts from the other two Northern zones, Buhari’s votes would be whittled down to make up the requisite percentages in terms of spread but no more. He believes that it may be a waste of time and resources trying to compete in the President’s traditional enclave other than to strive to get up to 25%. PDP should instead focus on mobilising the forces from the opposite direction and lockdown four out of the six geo-political zones.

“Saraki says he is well-positioned to make this happen. With one leg in the North and another in the South, especially the South West, the people would have a higher stake in the Presidency and this will galvanise more passionate voters. If the PDP presents just anyone, there may be voter apathy and Buhari would coast home to victory. As to where his deputy will come from, it would have to be from the South-East/South-south axis, since he has already covered the South West, technically. Theoretically, this would ignite enthusiasm in that region. He believes the APC has played into his hands somehow by this calculation.

“According to Saraki, the only reason Asiwaju Bola Ahmed Tinubu has been fighting him is because he wants to take over from Buhari in 2023. “Where does that then leave the Igbo people who have not been able to produce any Vice President or President since Dr Alex Ekwueme in 1979-1983?” In simple Arithmetic “PDP needs a candidate who can block the South West and the South East simultaneously since Buhari will still run with Osinbajo…” This race is getting mathematically interesting and the Saraki option is looking feasible, I thought. However, Saraki said he was only just starting. He said those days are gone when an individual can instruct people to go out and vote as if they have no minds of their own.

“He plans to challenge and tackle Buhari strictly on issues and not pettiness, which he sees to be the current order of the day. He said the world is driven today by knowledge and not by crude force. He said he is better informed on how to resurrect the comatose economy which collapsed because of the over-simplistic and myopic handling of affairs since Buhari took over. “Any student of elementary economics would know that a country can never develop in an atmosphere of obsession for scaremongering, instability, uncertainty, Stone Age policies… Nigeria urgently needs a unifier in deed and not in words… I’m one of the most cosmopolitan leaders around today with every sense of modesty…”

“Saraki is looking forward to a serious debate between him, Buhari and other candidates on every aspect of daily life in Nigeria. “If Buhari likes, he can stay at home and do the debate by Skype or whatever, but moving forward, we must discuss Nigeria publicly…Anyone wanting to lead a country as important as Nigeria in this century must be someone who can ably represent us in the comity of nations and has a grasp of modern ways of life.”

“Saraki says he has matured with time in various offices and his cumulative executive and legislative experiences are almost second to none in the country… ‘You can see this in the way I have conducted the affairs of the Senate, and we are easily the best, but for the occasional and unfortunate distractions from people who see me as serious threat to their personal ambition. They had to feed the President with lies and destroy our relationship. I did all I could to support the government, but I was constantly harassed and treated like a pariah by those desperate to keep a firm grip on Nigeria…’ But he continues to see the positive side of his travails. ‘Perhaps, I would not have declared interest in this race, but they kept pushing me away, demonising me for no reason, but, inadvertently, they made me very popular by their action and some of those who never liked me started pitying me as a victim of oppression.”