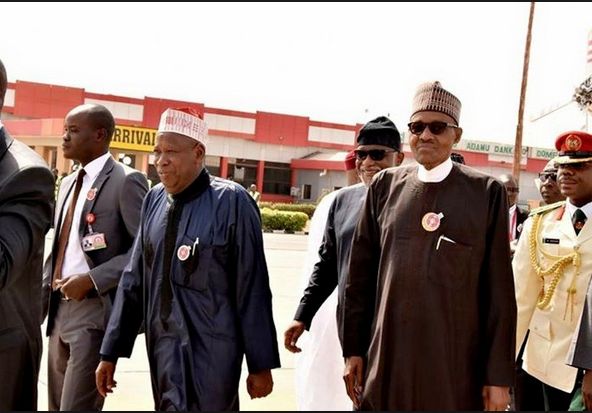 Ganduje confidence and outburst was informed by the stunning victory posted by the All Progressive Congress during the weekend local council election which the party candidates won with 2,677,469 votes.

The Governor who spoke during the swear in ceremony of the 44 new local government council Chairmen, and 484 councillors noted that the rise in votes for APC was a direct impact of the party’s laudable policies.

The total votes cast during the weekend local council election was higher than what the President got in 2015 general election.

The overall number of votes scored by the APC candidates is more than what President Buhari scored in 2015 general election, that is to say that if eventually he agreed to contest 2019 general election, I assured you, we will give you 5 million votes.

He stressed that “we have seen in this election was a clear indication that Kano is APC and ready to contribute to its success any time.

Turning to the elected council officials, Ganduje warned them to tread softly on the common patrimony, as he warned that any one caught for pilfering and mismanagement would pay a price.

The Governor said the 2018 local government budget has been approved by the state House of Assembly, and therefore must operate within the limit of the provision.

He warned “you will be given free hands to operate in your respective council, but whoever sidesteps his bound will pay a price”Ganduje therefore charged them to work with relevant stakeholders within and outside their domain.