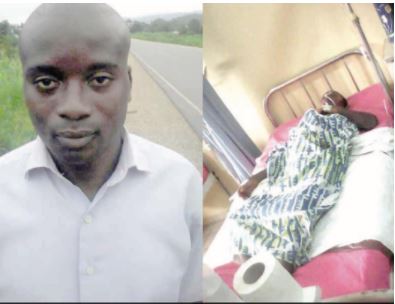 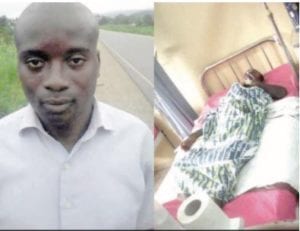 Oops!!!! This woman is finding it difficult to poo Diego the fact that her intestines were being destroyed by a Doctor. But it is yet to be confirmed if the doctor is certified or not.

From the report gathered by Dailysun, it was made known to us that after 5 years of marriage, Isaac and his wife, Victoria began a search for the fruit of the womb but got their situation worsened by a surgeon in Abuja.

29 year old Victoria reportedly walked into NIQUAD Clinics, at Orozo, with both her ovarian and fallopian tubes intact but allegedly lost all after passing through the knife of Dr. Empson Nwarigon, the hospital’s Chief Medical Director (CMD).
Mr. Isaac, led by his lawyer, Hameed Jimoh, narrated the ordeals of his wife in a 73-paragraphs affidavit he deposed to before the Commissioner of oaths, FCT High Court, Abuja, pursuant to the requirements by the Medical and Dental Council of Nigeria (MDCN).
He wrote “the Doctor carried out surgery on my wife and in the process, negligently cut my wife’s small intestine organ and tied it with threads in several places and since then, she can no longer defecate. That around the end of July, 2017, we met Dr. Nwarigon who asked me to take my wife for scanning for diagnosis, which I did on. That the scan result discovered that my wife has “Left Mucinous Ovarian Cyst” and it suggested ‘HSG for further evaluation’, but that the CMD asked my wife to undergo surgery in order to remove it. That my wife and I were never informed by the CMD or signed any document about the implications of the surgery.”
The surgery was carried out on August 7, 2017, and the wife could not defecate afterwards. He stated that on August 12, 2017, Dr. Nwarigon gave him a referral letter to Maitama General Hospital.
He added that: ‘during surgery at Maitama General Hospital, I was invited into the theatre room to witness the errors committed on my wife by Dr. Nwarigon. I was shocked to see that my wife’s small intestine has been negligently severed by Dr. Nwarigon and was tied in different places with threads, which the doctors had to loosen in order to carry out a successful surgery. The most surprising thing is that he never told us anything’.
Effort to reach Dr. Nwarigon on the issue, failed. He was said to be indisposed for the past two weeks.

Girl Looses Her Cool And Stabs Her Boyfriend To Death