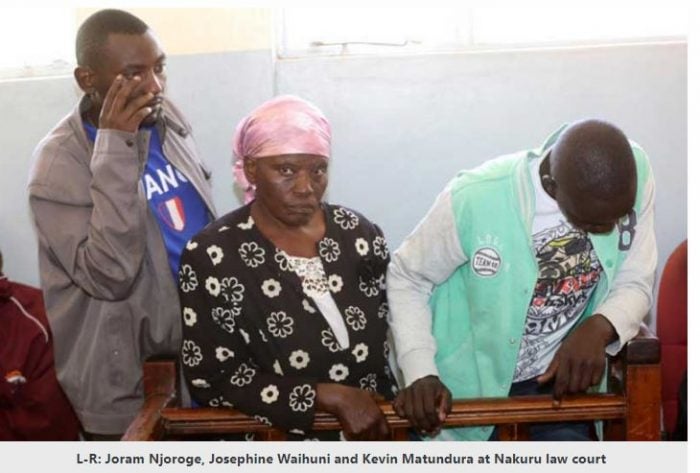 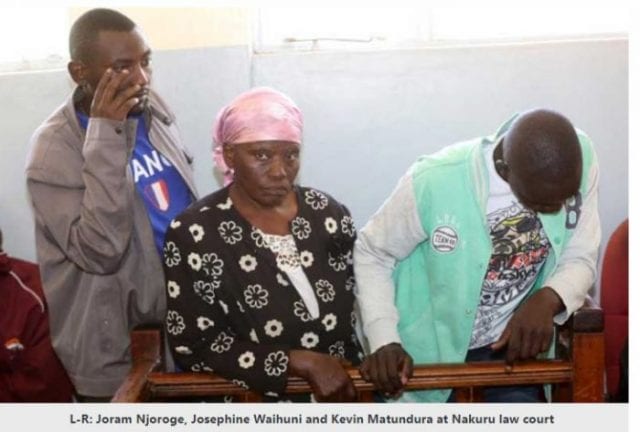 A woman who was raped during a robbery and later asked out on a date by one of the attackers narrated her ordeal to a Nakuru court.

In her testimony, the victim said one of the three suspects, who include a woman, accused of robbing her family at gunpoint, directed her to the servant quarters. He then ordered her to remove her clothes before committing the heinous act.

Joram Njoroge, whom she identified as the one who raped her, had earlier ordered her to the bedroom and asked her to UnCloth in front of her father.

“I did not know what was coming. I pleaded with him that I was on my periods, but he could hear none of it and held a gun on me and ordered I take off my clothes,” she said, adding that Njoroge had threatened to rape her.

The woman who testified before Nakuru Senior Resident Magistrate, Yvonne Khatambi said she tried pleading with the man to no avail, even after proving to them that she was menstruating.

The armed robbers, she said, left their home after holding the family hostage for eight hours. Her uncle and two cousins she revealed had their hands tied.

She told the court that she could identify the two-Kevin Matundura and Njoroge- as at the time of entering their house lights were on.

Njoroge had not covered his face to hide his identity. The woman also managed to identify him as he had a gap between his front teeth and a cracked tooth on his upper jaw.

The suspects blew their cover after one of them started conversing with the woman through phone, seducing her.

Matundura wrote to the woman informing her where their vehicle was after leaving the home as they had exchanged contacts.

She said Matundura, after leaving the home, called her and apologised for the gang’s misdeeds, whilst asking her for a relationship.

The woman alerted Criminal Investigation officers and she kept engaging the suspect until they agreed to meet on a date. The suspect went on to send her Sh200 for her bus fare.

Njoroge is charged alongside Matundura and Josephine Waihuini. The latter is accused of being a decoy who makes unsuspecting would-be victims to assume it’s a normal group of stranded men and a woman at night.

They allegedly, on March 15, 2017, at Makutano while armed with a FN Herstal machine gun rifle and a pistol robbed a family of their assorted property.

Waihuini, however, is accused of associating herself with person in possession of deadly firearms, including a big AK47 that was in the gang’s possession. She is further accused of handling stolen property.

Among the items listed in the charge sheet include a sewing motor machine, ten bags of dry maize, a Samsung mobile phone, assorted clothes and shoes, a motor rolling machine and the drive-away car.

Related Topics:Plush news
Up Next