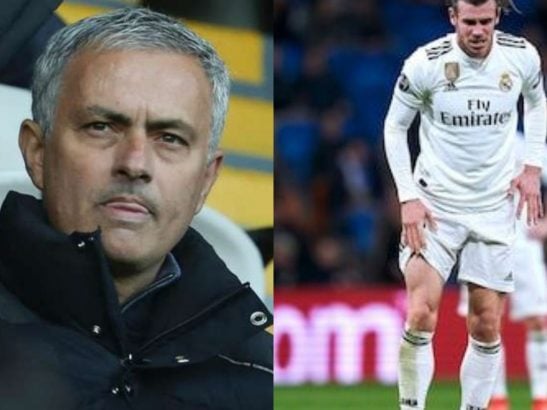 Jose Mourinho has reacted to reports that he has been approached by Real Madrid after the club suffered a 4-1 defeat in the hands of Ajax which saw them crash out of the UEFA Champions League.

Real Madrid were beaten 4-1 at home after getting a 2-1 win at Ajax. The loss makes it the fourth consecutive loss they’ve suffered.

Reports quote former president of the club Ramon Calderon as saying Mourinho has been contacted by the club.

Reacting to the reports via an interview with El Chiringuito TV in London on Thursday, Mourinho said:

“You’re talking hypothetically. There is nothing, not even minimal contact from Real Madrid.

“Real Madrid have a coach. Obviously, it makes me proud to hear that fans at the Bernabeu chanted my name during Madrid’s Champions League 4-1 defeat to Ajax, but nothing more.”

“What they have done will never be repeated.”

CLICK HERE TO JOIN OUR EVER ACTIVE WHATSAPP GROUP
Related Topics:Jose Mourinhoreal madrid
Up Next

Riverdale stars Cole Sprouse and KJ Apa are quarantining together during the COVID-19 pandemic. While fans expected lovebirds Cole Sprouse...