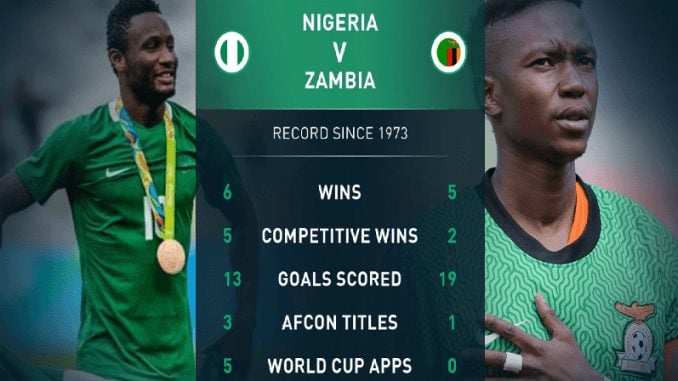 The Super Eagles are literally 90 minutes away from confirming their place at the Russia 2018 World Cup.

After impressive display against Cameroon, the next assignment for Nigeria is to silence the Zambian national team who also have a fighting chance of making it to their first senior FIFA World Cup ever.

The Godswill Akpabio Stadium in Uyo is the battlefield as the Super Eagles confront the Chipolopolo.

Nigeria presently has 10 points from four games while the Zambians are closing in from behind with seven points from the same number of games.

As expected, there have been so much talk in the run to Saturday’s game with the Eagles promising to wrap things up and the Zambians promising an upset.

It is cheering to note the Eagles have a full complement of their best legs and many expect they will deliver the ticket today.

Stay with PREMIUM NIGERIA for live updates of the Nigeria vs Zambia match today. Kick off is 5.00pm

All is set for the FIFA World Cup Qualifiers between Nigeria and Zambia. A win for the Eagles will see them have a sixth appearance at the World Cup. Zambia are hoping for a first appearances. The Chipolopolo were given no chance in the beginning stages but with wins over Algeria home and away, they put themselves in the running for a chance to make it to Russia next year.

The two teams have filed out. Nigeria in all green while Zambia are in orange and black

1′ kick off. Super Eagles will be playing the first half from right to left while Zambia will play from left to right

4′ Zambia get their first corner

13′ Great entertainment in this early stages. Games has been cagey and pacey with no clear cut chances for either side

14’Zambians are being allowed space and they show what they are capable of with that bombing forward from Ngonga but it is easily dealt with.

17′ Chance! Ighalo misses Moses. that should have been 1-0

Any kind of touch, that goal should have been in the net

23, End to end stuff at the Nest of Champions. Mulenga was caught offside and his effort was for nought

24′ Onazi is being stretchered out.

30′ Chance! Simon Moses tries for a goal from the Edge of the box but he is stopped by the Zambian goalkeeper

32′ The Super Eagles are piling on the pressure, Ighalo looking to profit but he was denied by Tembo

33′ Mikel drives forward and his clipped in a dangerous position but the Referee waves play on to the disgust of the fans in Uyo.

36 Fantastic save by Ezenwa as Mulenga shots from 20 yards

39′ Half a chance! Mikel smashes a volley well wide

First 45 minutes over. The Zambians had a goal in the net which was ruled for offside. The game which opened up in the latter stages saw the Super Eagles create chance but they were not clinical where it mattered the most.

Related Topics:Nigeria Vs Zambia
Up Next

Governor Udom To Give $10,000 Per Goal Scored By Super Eagles