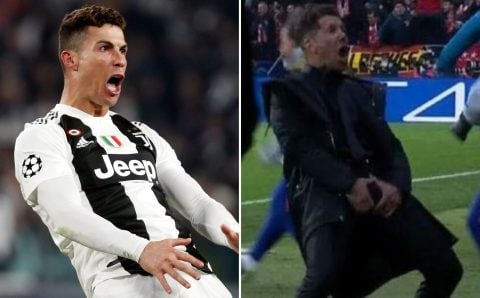 Atletico Madrid manager, Diego Someone has stated that Cristiano Ronaldo may have copied his celebration when the Portuguese netted an hat-trick in the game that saw Juventus advance to the quarter finals of the UEFA Champions League.

Ronaldo scored the three goals in the game which erased their 2-0 loss at Madrid in the first leg which saw Diego Simeone celebrating wildly by pointing to his genitals.

Speaking on how Ronaldo’s celebration seem to look like how he celebrated:

“Surely he did it thinking about his fans, like I did at the Wanda Metropolitano ,” was Simeone’s response when asked about it.

“He may have been saying they have personality.”

The game sees Atletico crashing out after it ended 3-2 on aggregates.

Speaking after the game, the Portuguese stated that the magic experienced on the night is the reason why Juventus bought him from Real Madrid.

“It is a special night, not only because of my goals but because of the incredible attitude of the team,” Ronaldo said afterwards.

“This is the Champions League mentality.

“We haven’t won anything yet, but this is a source of pride and shows we are on the right track.

”Juventus brought me here for this, to help and do my job, so I’m happy that we enjoyed a magical night.”

He also had praise for Los Rojiblancos.

“They are a great team and a very difficult opponent, but we are too and we showed that tonight,” he concluded.“We certainly deserved to qualify.”

Related Topics:Cristiano Ronaldo
Up Next