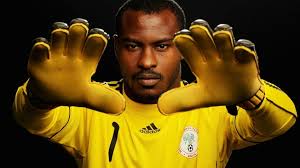 Nigerian goalkeeper, Vncent Enyeama, has announced his return to club football.  The 35-year-old on Tuesday shared a clip online showing he has returned to Lille; Ligue 1 club where he was declared suplus in April.

Recall that in the summer Enyeama and 11 other teammates were deemed surplus for requirements and the new manager of the club; Marcelo Bielsa, upon his appointment told them to leave the club.

However, Enyeama could not make a move in the summer, as he was recuperating from an meniscus surgery he had towards the end of last season.

The former Super Eagles stopper is now fully recovered and he sent across his excitments to be back in football with post he shared online.

With Enyeama’s lifeline at the club-side, Coach of the Super Eagles Gernot Rohr may now be close to getting the goal stopper also back to the national team.

In March 2017 Super Eagles coach, Gernot Rohrconsidered persuading Enyeama to rejoin the Super Eagles saying Enyeama’s retirement was as a result of a misunderstanding between him and former coach Sunday Oliseh.

Also in August 2017 the president of the Nigerian Senate, Senator Bukola Saraki tried persuading Eyeama to return to the Super Eagles of which he turned down the request.

Only time will tell if Coach Rohr would be successful to bring Enyeama back ahead of the 2018 World Cup.

“Nigeria can lift the trophy In Russia 2018”- Amaju Pinnick