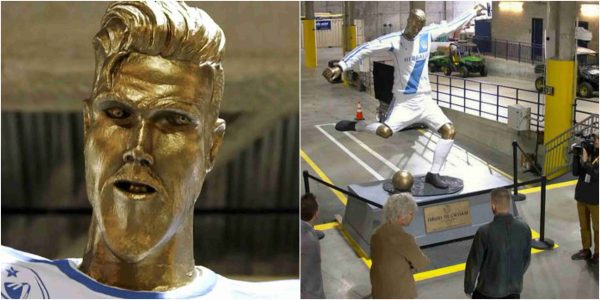 An ugly David Beckham’s statue looking like Stretch Armstrong was unveiled before the soccer legend, in a prank video and he was really pissed at the horrifying statue.

Comedian James Corden had decided to pull the prank on David Beckham, with the fake statue in his honour – ahead of the real one being displayed at LA Galaxy’s stadium.

The football icon looked shocked and disgusted when he first saw his immortalised face, telling onlookers he looks like “Stretch Armstrong”.

In a clip from Monday’s The Late Late Show, the former footballer, 43, was less than impressed as he was forced to mingle with annoying fans who were actually actors and then branded the sculpture “embarrassing” and ordered the filming crew to “stop the cameras” at his private viewing.

“This is different than what it was when I last saw it in Chicago. I mean, look at my chin.” Growing more and more furious by the second, the award-winning footballer ordered his film crew to stop recording. 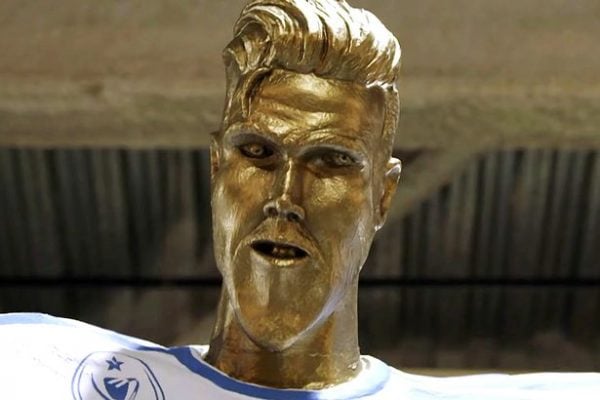 He continued to complain and added:

“It doesn’t look anything like me, look at the eyes. The only thing that is good is the hair, look at my arse. I really dont see how this can go out.

“My parents are coming from London, my wife is coming over. It’s lucky my kids [Brooklyn, 20; Romeo, 16; Cruz, 14, and Harper, seven] aren’t coming to the ceremony. If my kids were to see this, they would just cry.

“I don’t want to offend you in any way, but its a big thing for me. There is no way it can go at the front of the stadium,” David explained before attempting to leave the studio. 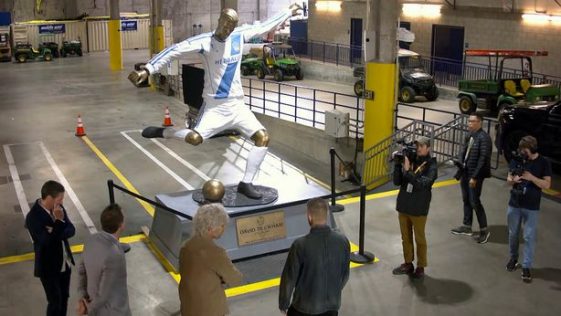 To end the prank a bulldozer then smashed the sculpture trying to pick it up, causing David to joke: “That’s probably done me a favour!”

Finally ending the prank, the star giggled when comedian James Corden walked on set and a looking relieved Beckham said: “Thank God for that!”

Related Topics:David Beckham
Up Next