The D23 expo is currently happening in Anaheim, California. This weekend-long convention is dedicated to all things Disney. Although Marvel is a huge part of San Deigo Comic-Con, there are more reveals saved for this convention. Some have already dropped in the way of video games. However, everyone is waiting to see what else Marvel Studios has planned. Despite the superhero news, Disney dropped a host of new announcements relating to Pixar, live-action remakes, and their animated features last night. One of those announcements is a live-action prequel to the 2019 hit, The Lion King. Disney is officially putting a live-action prequel together that will detail the life of Mufasa. It is aptly titled Mufasa: The Lion King.

This is quite exciting news considering the live-action remake of The Lion King was a massive hit. The film would go on to make over $1.6 billion in worldwide box office numbers. The Lion King is arguably the best Disney animated feature ever made, and the 2019 remake did the original justice by bringing in the same level of humor and heart. James Earl Jones did the voice of Mufasa for the 2019 remake, but he is set to be replaced by Aaron Pierre, who will play the younger version of the character. Kelvin Harrison Jr. will also replace Chiwetel Ejiofor as Scar. Interestingly, Billy Eichner and Seth Rogen are rumored to return as Timon and Pumbaa. 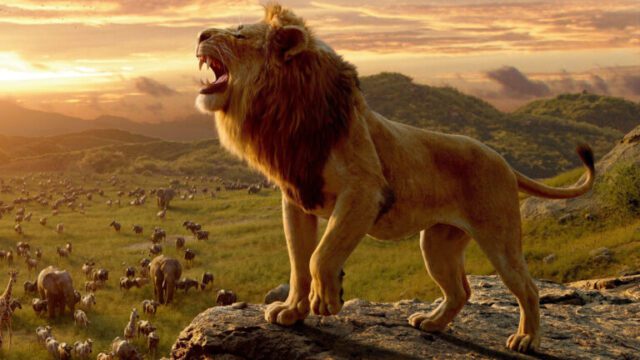 The footage that was shown at D23 was of Raifiki speaking to young cubs about Mufasa. He tells the story of Mufasa being an orphaned cub who finds that he must traverse the world alone. He is in the desert when a flood sweeps him away, leaving him orphaned. He came from nothing to become the king of Pride Rock. Billy Eichner’s Timon was also heard in the trailer, and both he and Seth Rogen have been labeled as part of the cast for the prequel film. Although this might mess with the timeline a bit, it is kind of fun to think that both Mufasa and Simba met the unlikely duo while being taken away from their homeland. Still Mufasa: The Lion King sounds like it might be a huge success.

Barry Jenkins is set to direct Mufasa: The Lion King. The man famously directed Moonlight, which won a Best Picture Academy Award. He also directed If Beale Street Could Talk, which was nominated for a Best Adapted Screenplay Academy Award. Jenkins is a high-profile director, and it will be interesting how he continues this story. The 2019 live-action remake was directed by Marvel alumni, Jon Favreau.

Mufasa: The Lion King has a release date of 2024, though no specific timeframe was given for that year. Hopefully, we are going to b able to see this prequel Disney film sometime in early 2024. The only cast that has been announced are John Kani, Billy Eichner, Seth Rogen, Kelvin Harrison Jr., and Aaron Pierre. We are likely to hear more about this film in the coming weeks.